In 1971 Suzuki buys a Wankel licence, precursor of the rotary piston, in order to develop a new engine for its motorcycles. The investment from Suzuki in this project was important as at the period the rotary engine from Dr Felix Wankel was a revolution and just started to be mass-produced. Suzuki had to start from a blank page and go for it, something that many manufacturers never did. Suzuki worked hard and invested a lot to produce a reliable and strong engine. After a 2-year development, 200 modifications and 20 patents filed, the fruits of this relentless labour ensured the creation of a reliable machine named Rotary RX-5, introduced at the Tokyo Motor Show in November 1973. Following few adjustments, the concept became RE-5 and its sales started in 1974.

The RE-5’s engine is a rotary mono-piston of 497 cm3 developing 62 hp. To manage its operating temperature Suzuki chose a water cooling and took back the impressive radiator called “the hot-water bottle” at the period. The RE-5 had a rather high power and torque for the period regarding the cylinder capacity, and above all immediately available with linear revving! The particular melody of the rotary engine confirms that we are dealing with an engine like no other. Very smooth with a high torque at low revs, worthy a big 4-stroke, it is characterized by an almost total absence of vibrations, a true travelator! With 230 kg on the scale, the RE-5 inherits from the best technology of the period to be able to stop it: a double front disc.

The design of the motorbike was entrusted to the bodybuilder Giorgetto Giugiaro who strived to remind the rotary engine principle through many details: the dashboard is cylindrical, the indicators are all round, the rear light is also cylindrical and circles appear on side covers, all of it in an atmosphere inspired by the futurist universe at the period between the Star Trek series and the Star Wars trilogy! The Suzuki logo on the other hand shows the rotor design, a triangle. This original design arouses astonishment and directly takes you back to the 70’s, certainly the most successful in terms of technological innovation. When turning the ignition key to the first notch, the translucent cylinder of the dashboard opens (hence the nickname “bread box”!) on a row of warning lights including the light for the two oil pumps. There is even a small digital window indicating the engaged gear. Science-fiction atmosphere guaranteed!

The RE-5 doesn’t have anything conventional and never goes unnoticed. Sold to only 6000 exemplars through the world between 1974 and 1976, this is the only motorcycle with rotary engine in the world that have been mass-produced. Unjustly misunderstood at the period because of its atypical design and the unknown that reigned around the Wankel engine devoid of camshaft, valve and rod, the RE-5 whose fuel consumption was relatively high had the misfortune to bump into a petrol crisis context. It didn’t have the success expected by Suzuki and the rotary engine was abandoned despite the huge amounts committed in this project. Nowadays the RE-5 is considered as an extraterrestrial and is a fascinating machine with a stupefying technology. This absolute rarity will find its place with an eclectic collector. Our very beautiful Firemist exemplar manufactured in October 1974 has the body number 10702, the engine RE5-10394 and is registered in France. In perfect state with its original paint, it shows 6248 miles on the clock corresponding to its original mileage. We have its Owner’s Manual, the parts catalogue and a complete folder of technical documentations. 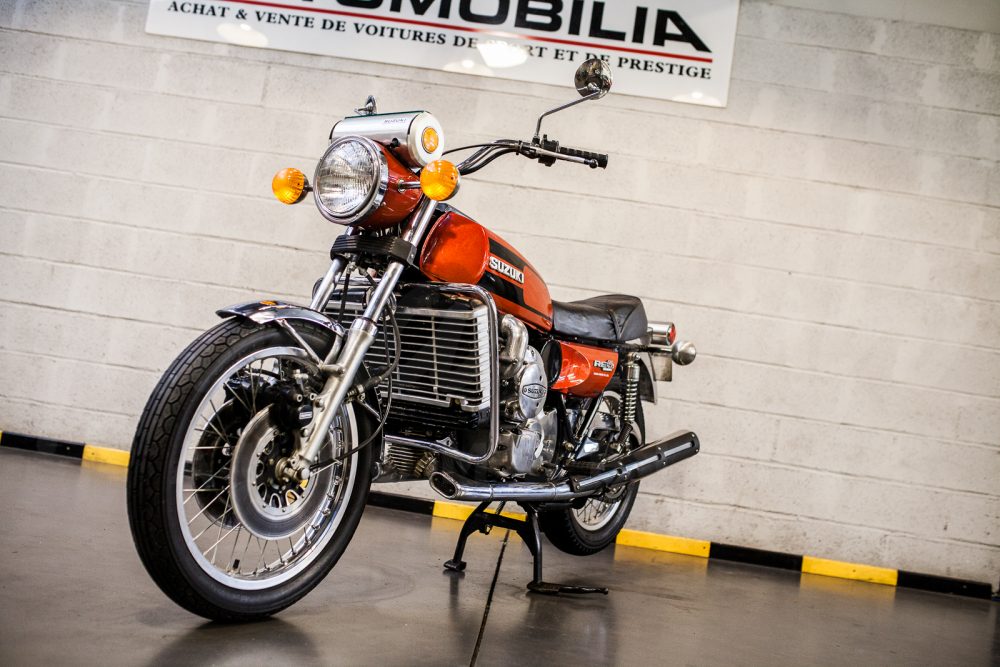 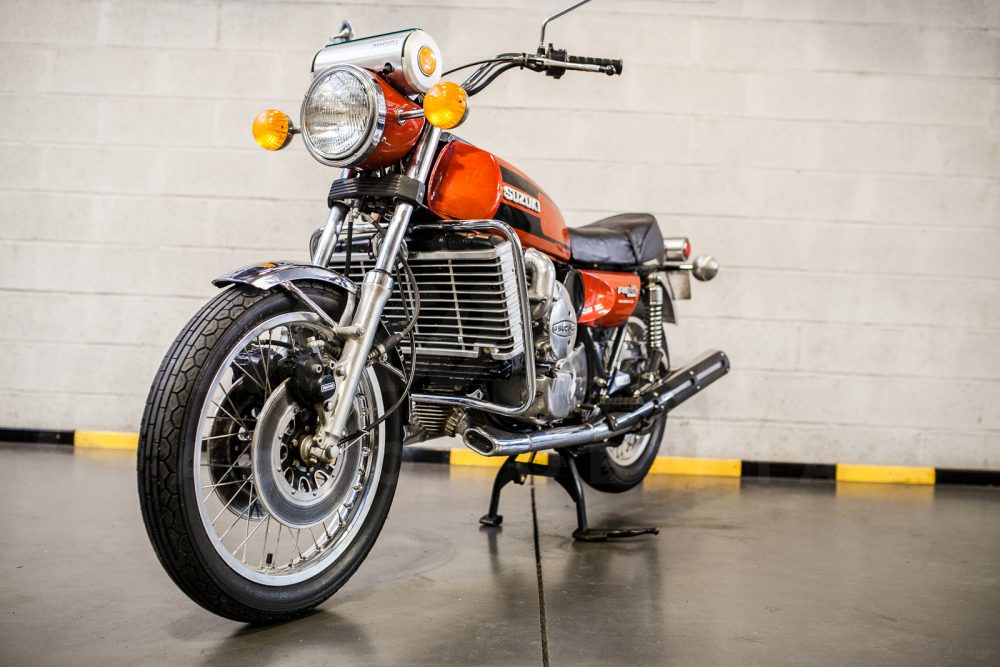 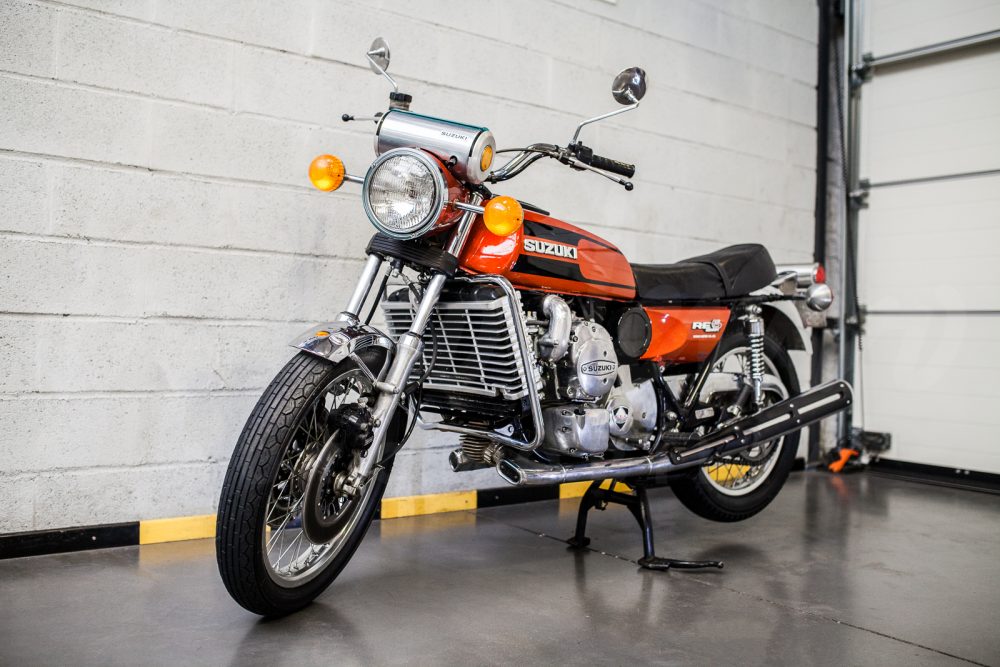 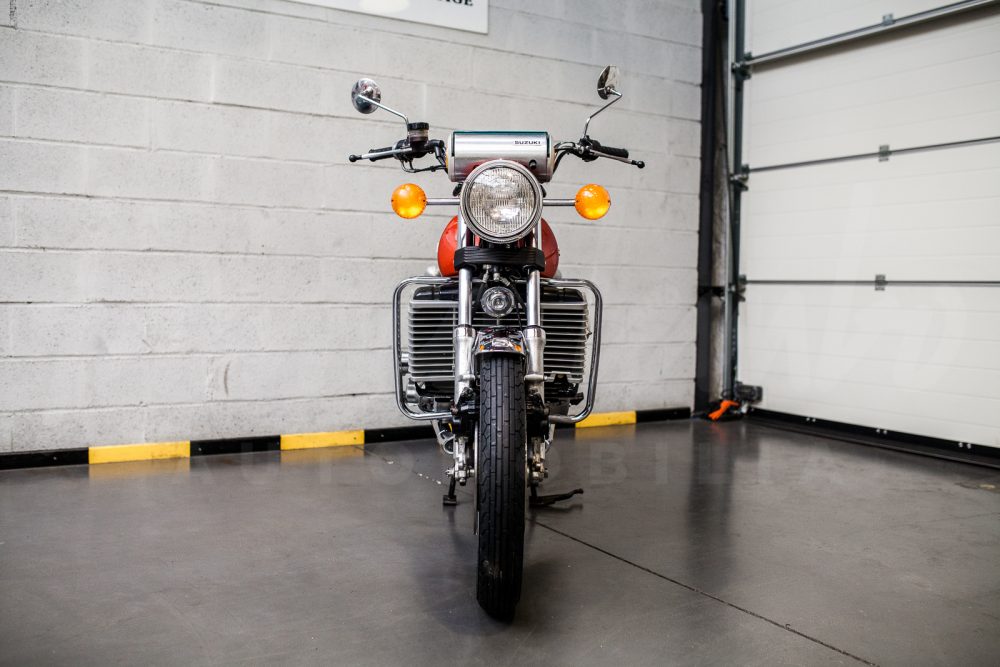